What are terpenes and what to know 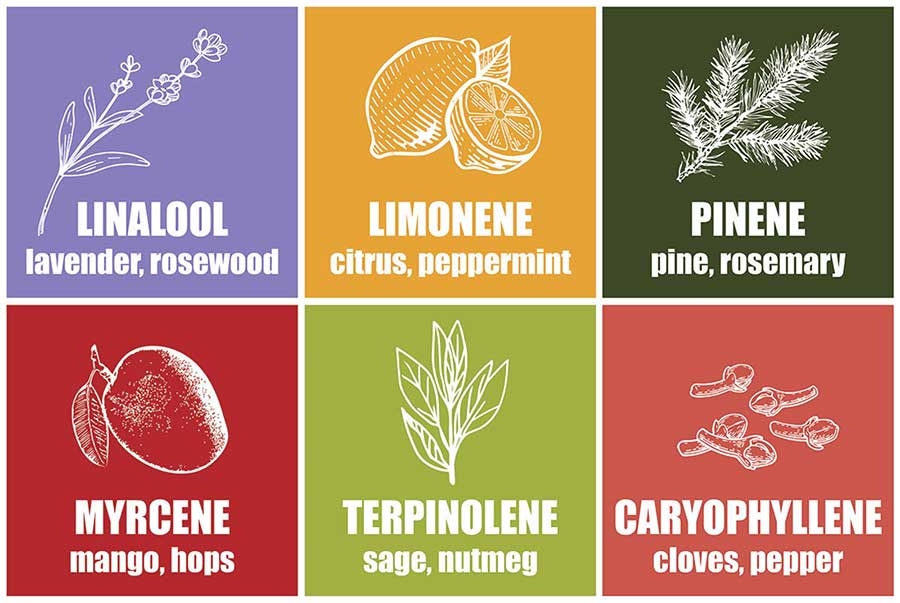 You already know what terpenes are because you’ve experienced them all your life. Simply put, terpenes are what gives an orange its citrusy smell. They give pine trees their unique aroma. They’re even responsible for the relaxing effects in lavender. They are chemicals that determine how things smell.it’s been discovered that terpenes can play a big role in that as well. In fact, cannabinoids and terpenes work together in something called the entourage effect. The entourage effect simply means that cannabinoids such as THC and CBD, along with the hundreds of other compounds, along with the terpenes, are meant to work together. It’s the whole plant that does the best job, not just a single compound. While relief does come from using a CBD oil or a THC oil, whole plant therapy has been the most common use. Utilizing all the compounds and terpenes in the plant may just be the best way after all. Terpenes can intensify or downplay the effects of the cannabinoids. Have you ever noticed how two similar strains can produce profoundly different effects? One may leave you with couch lock and the other may energize you? That’s another aspect of the entourage effect, which is driven by both cannabinoids and terpenes.

Wich terpenes we have in Cannabis

Myrcene is the most prevalent cannabis terpene, representing roughly 20% of all terpenes in commercial marijuana. It gives off a distinct smell that resembles clove. The aromatic compound is also found in high quantities in mango, basil, lemongrass, and hops, a key ingredient in IPA beer. It has a calming, mild sedative effect and is also an analgesic.

For Example our Auto Dark Purple

Contrary to popular belief, not all pot that tastes like citrus or lemon has the limonene terpene. This common terpene gives a fruity or citrus-like flavor and a fresh scent that many stoners love. Limonene is also found in citrus fruits and juniper and is used for its stress and anxiety reducing properties.

For example our Cotton Candy Kush

Like the name suggests, pinene is found in pine trees, conifers, rosemary, dill, parsley, and basil plants and is the most common terpene on earth. In cannabis, the compound is often the second highest in concentration, but rarely the main terpene of a strain. Pinene is associated with reduced inflammation, pain, and anxiety.

One whiff of this therapeutic terpene will immediately transport you to a fragrant lavender field. Linalool gives lavender its characteristic scent. Plants with linalool are often used medicinally for aromatherapy purposes, anxiety reduction, and for their anti-microbial and anti-epileptic properties. Linalool isn’t found in high quantities in cannabis, and is rarely the most prominent terpene in a strain.

For example our Caramelo

That diesel or spicy tingling associated with some of the most popular marijuana strains comes from the caryophyllene terpene. The antioxidant-rich compound is also found in black pepper, cinnamon, oregano, and cloves. There are numerous terpene benefits, and caryophyllene specifically can help treat inflammation, anxiety, depression, and more.

For example our Critical Jack Herer

A common terpene present in the cannabis plant that is recognizable for its woody aroma along with citrus and floral notes. Also referred to as alpha terpinolene, the terpene's effects may be mildly to moderately sedative.

We hope that by this blog you know a little more about the terpenes and that it wil help you in your search to the perfect strain that fits you the most.